Zucchero at the Hard Rock Café in Warsaw 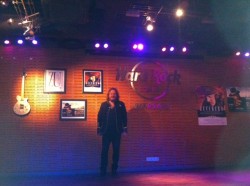 Yesterday night Zucchero joined the party to during which he was was given his special place on the walls of the Hard Rock Café in Warsaw. Also present at the celebration were the president of the Polish base together with the representative of the Hard Rock Café head office who came directly from Orlando, Florida.

Zucchero donated some memorabilia from his tours around the world, among which one of his famous hats, and a signed Gibson guitar. Last but not least Sugar’s corner features an orginal poster from the 2004 concert at the Royal Albert Hall.

A dinner followed the cerimony, and after that, the Hard Rock Café management team together with Renato Passoni, team manager of the No-stress-team racing stable, surprised Zucchero with a guitar shaped cake, this way celebrating Sugar’s birthday a few day in advance.

Many fans and people from the media also joined the party as well as all Sugar’s staff, which in this days is quite busy getting ready for the second leg of his European tour which will start tomorrow right in Warsaw.
The Hard Rock Café is willing to give Sugar some room on its walls on other venues around the world including the U.S.A and Canada.