The King of Blues returns to the Italian stage with 10 extraordinary shows at the Verona Arena. 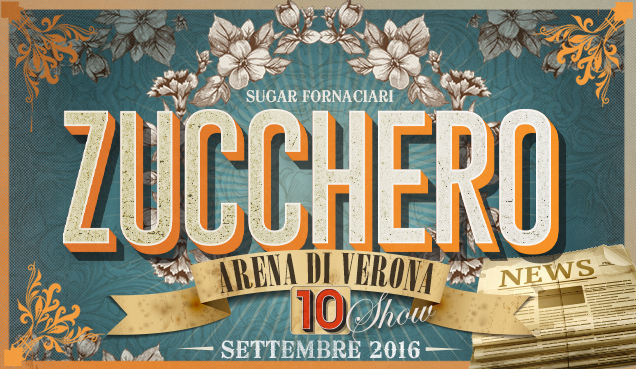 The King of Blues returns to the Italian stage with 10 extraordinary shows at the Verona Arena.

ZUCCHERO “SUGAR” FORNACIARI
The 10 unmissable dates at the Verona Arena will be his only live shows in Italy in either 2015 or 2016!

In the wake of the seven extremely successful concerts performed at the Verona Arena for the “Chocabeck” tour, Zucchero will be back on the live stage in September 2016 having chosen the prestigious amphitheatre for his Italian return. The only artist who can boast 10 consecutive dates at the Arena, these shows will be the Italian bluesman’s only live appearances in Italy in either 2015 or 2016!
In what Zucchero considers “one of the best places in the world for live music”, he will perform a special and entirely new show each night.

During the two days in which Zucchero is not due to play, those dates when the bluesman will be able to catch his breath between one series of shows and another, the stage will be made available to young and acclaimed singers, giving them the chance to perform on one of the most prestigious stages in the world. The choice of artists will be at Zucchero’s discretion and, assisted by his able staff, he will decide who the beneficiaries of such a golden opportunity will be, depending on his or her artistic talent and in particular the extent to which such artists will have distinguished and established themselves at the time.

Advance ticket sales will be available for the following dates on TicketOne, and through all the usual channels, from 11 o’clock this morning, Tuesday April 28th:

Having met with great success in the past among Zucchero’s fans, all those who purchase a ticket on www.ticketone.it (by December 31st 2015) will receive a SUGAR CARD, a memorabilia card which, as well as guaranteeing admission to the concert, also offers the holder discounts on travel, hotels, restaurants and the many tourist attractions that the city of Verona has to offer. On top of that, there are also many other incentives and extras for the holder to enjoy (for info: www.fepgroup.it).

We would like to thank the Mayor and the City of Verona for their invaluable assistance.