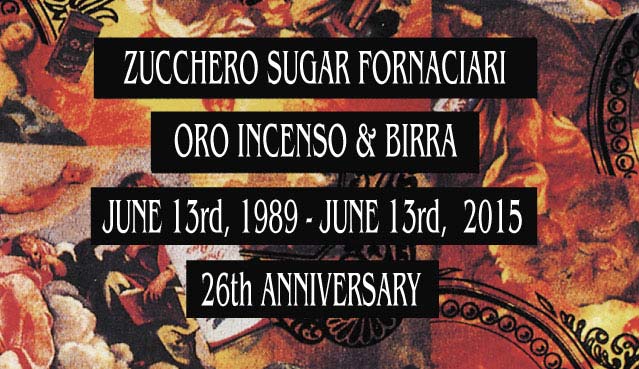 On June 13th 1989, “Oro, Incenso & Birra” was released. This was Zucchero’s sixth album and represents a milestone in his body of work, as it was through this release that he established himself as a true international star.

The album achieved the incredible distinction of becoming one of the best-selling Italian albums in the world, exceeding 8 million copies, and is still in demand today both in Italy and abroad.

To celebrate the 26th anniversary of the release of “Oro, Incenso & Birra”, a number of initiatives have been organised:

– All Zucchero’s fans who send in a photo of themseleves with their copy of the album, or other memorabilia related to the release of “Oro, Incenso & Birra”, will have their photo published on Zucchero’s official Facebook page, and they will be able to tag themselves and share the image with all their friends.

– Radio Italia, an official partner in this initiative, will play a track from the album every day between the 4th and the 11th of June, and on June 12th will celebrate “Oro, Incenso & Birra Day” day by playing all the tracks from the album and hosting Zucchero in an exclusive telephone interview.

The tracklist is a veritable procession of classics from Zucchero’s repertoire and of Italian music as a whole, an array of immortal songs featuring collaborations with famous Italian and international artists:

A Wonderful World – with Eric Clapton on guitar

The “Oro, Incenso & Birra” stadium tour was, like the album, a huge success: 41 sold-out shows in stadiums all over Italy, some of them enhanced by special guest appearances by great artists such as Miles Davis, Joe Coker, Ray Charles, Dee Dee Bridgewater, Paul Young, Clarence Clemons, The Blues Brothers Band, Solomon Burke and Eddie Floyd.