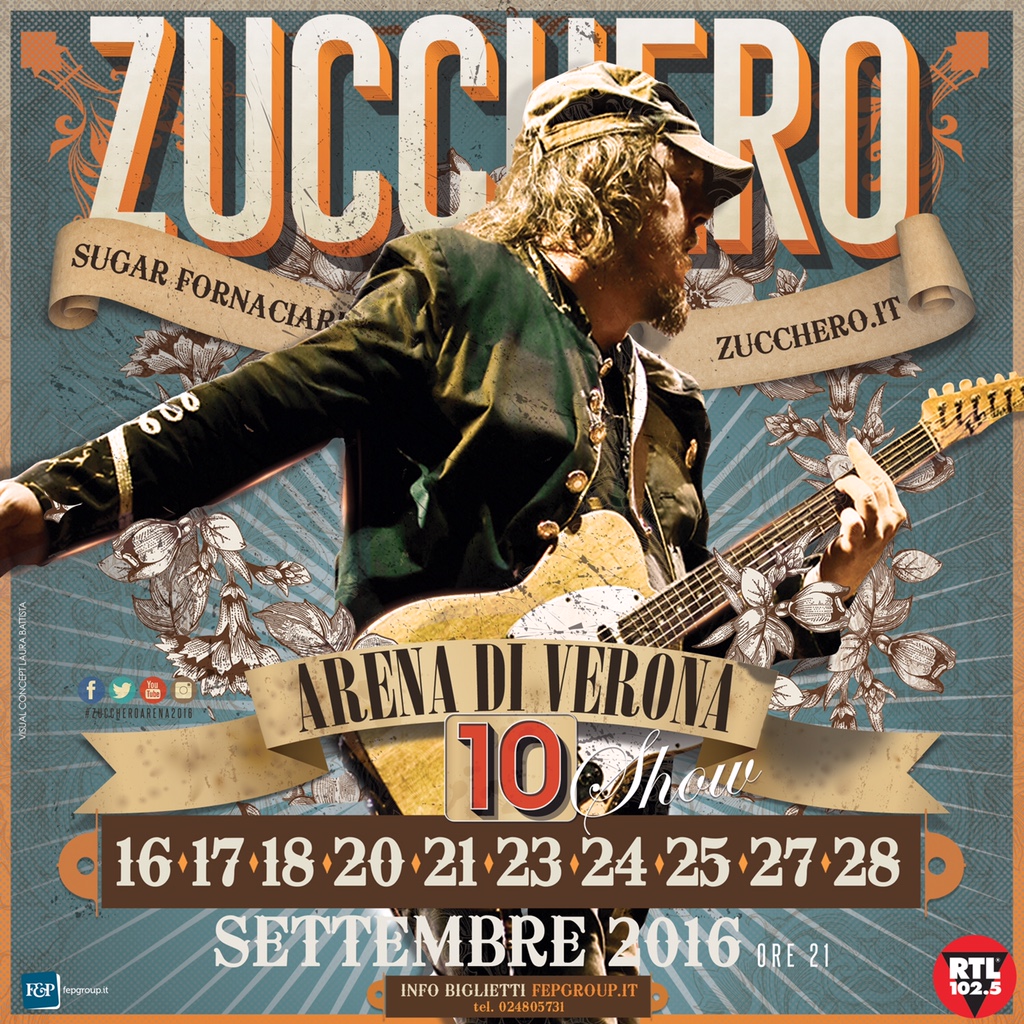 ZUCCHERO’s special relationship with the City of Verona and its prestigious amphitheatre has given rise to the idea of tracing the most significant moments of a unique career through 10 extraordinary shows at the Arena. His body of work, which can boast record sales of over 60 million, includes such gems as the masterpiece “Oro incenso e birra”, one of the most important albums in the history of Italian music as well as one of the best selling Italian albums in the world at over eight million copies. The ten shows at the Arena will also provide the ideal opportunity to perform material from his new album, due out in May 2016 on Universal Music.

The shows on September 16, 17, 18, 20, 21, 23, 24, 25, 27 and 28 will be Zucchero’s only live dates in Italy in 2016 and will mark the first leg of the Italian artist’s world tour. The great Italian bluesman had no hesitation in choosing the Verona Arena for this exceptional event, a special location which hosted as many as seven sold out dates of his “Chocabeck tour” and which he rates as “one of the best live music venues in the world”.

TICKETS AVAILABLE ON TICKETONE AND FROM THE USUAL ADVANCE SALES OUTLETS

On each of the ten evenings Zucchero will present a unique show with the participation of a different special guest on each occasion, thus treating the audience to a new and unrepeatable experience every night.

From September 16th to 28th, the city of Verona will be transformed into the “city of Zucchero”, thanks to a number of parallel initiatives aimed at consolidating the relationship between the artist and the city.

Indeed, an exhibition will be set up near the Verona Arena entirely dedicated to Zucchero, a retrospective celebrating through images and words one of the most important careers in Italian and international music. An opportunity to relive the numerous achievements and successes of more than thirty years of music, from humble beginnings to international stardom. Moreover, over those two weeks, the streets of the city centre will be lined with some of the best Italian street musicians around, offering their own interpretations of the great bluesman’s songs.

On the evenings of September 19th and 26th, when Zucchero will not be performing, the spotlights of the Verona Arena will still be shining. The essence of these two dates derives from Zucchero’s commitment to promoting a new generation of emerging artists.

On September 19th, the stage will be entrusted to Twitter (official partner for the 10 Arena shows) for a special event called “TwitterArena”, during which the emerging artists who have gained most popularity on the real-time communication platform will perform. They will be joined by influencers and show business celebrities for a fantastic evening of music both live an online.

On September 26th on the other hand, the Verona Arena Stage will be made available to one or more artists chosen from those who best represent the young music scene of the day, a tribute which Zucchero has worked hard to put together in order to give visibility to a new generation of Italian and international artists.

As a memento of this special event, all fans who purchase a ticket on www.ticketone.it by December 31st 2015 will receive a SUGAR CARD, a memorabilia card which not only acts as a ticket for the show, but also offers the holder a range of discounts on travel, hotels, restaurants and the many tourist attractions the city of Verona has to offer, as well as providing numerous other benefits and extras (for info: www.fepgroup.it).

We would like to extend our heartfelt thanks to the Mayor and the City Council of Verona for their cooperation.

RTL 102.5 is the official radio media partner of Zucchero’s “Arena di Verona – 10 shows”, an event organised by the F&P Group.