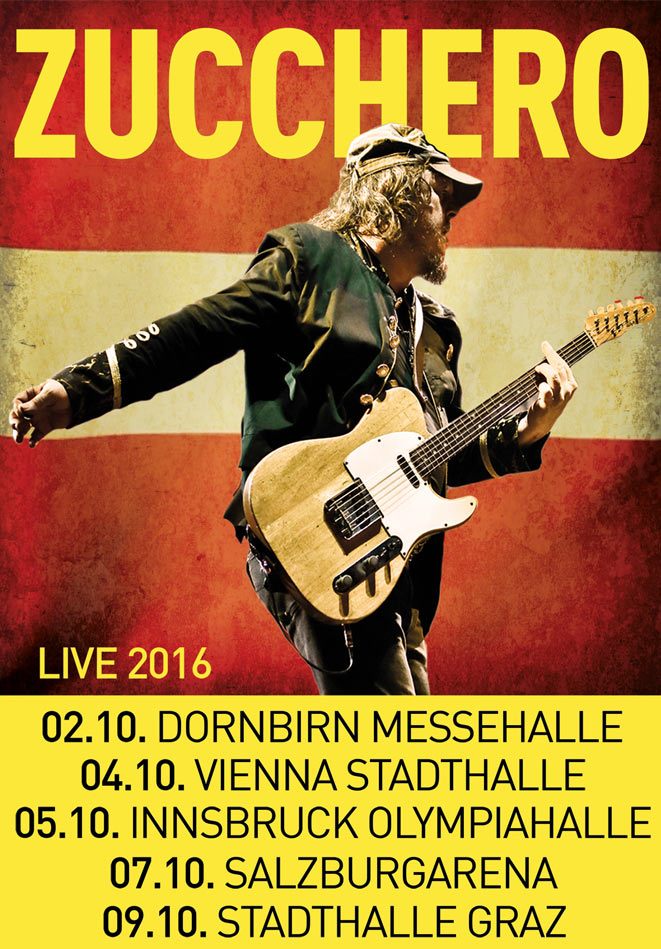 Just end of September Adelmo Fornaciari, better known as ZUCCHERO celebrated his 60th birthday. About a week later on October 3rd the Italian superstar performed at the solidarity concert „Voices For refugees“ at the Heldenplatz in Vienna. And one year from now he’ll be coming back to Austria for his Live-Tour:

ZUCCHERO, as one of very few Italian musicians, suceeds also abroad not only because of his collaborations with other great musicians, but also because of his – legit – outstanding reputation as a live performer. His music has a lot of Italian flair to it, but still he proves with almost every note that his true musical passion is Blues.

„In Blues We Trust“ is consequently the credo of the Italian superstar. Blues, Rock, Gospel and Soul are his musical home. In 2012 with his last album „„La Sesión Cubana” and newly won influences like Latin, Tex Mex and Mexicali he took a step beyond and fulfilled also a long time dream – recordings in Havana, Cuba.

In his career that spans over three decades now, he has already worked with artists of many genres: among them legendary Blues man John Lee Hooker, Sting, Eric Clapton, Luciano Pavarotti, Solomon Burke, The Scorpions (Millenniums-concert with the Berlin philharmonic orchestra), Paul Young or Ray Charles, who paid him tribute by saying „Zucchero is one of the best blues musicians in the world.“

For the live-tour next year we are accordingly looking forward to a musical journey that will bring us many of his hits like e.g. . „Senza Una Donna“, „Baila“, „“Così Celeste”, “Cuba Libre”, ”Everybody’s got to learn sometime”, „Diavolo In Me“, „Il Volo“, „Miserere“, „Diamante“ (to name but a few) and probably also some new material.

Tickets will be on sale from next Tuesday, October 20th, 9.00am under www.oeticket.com