Tomorrow for the first time, special guest at the Festival of Sanremo 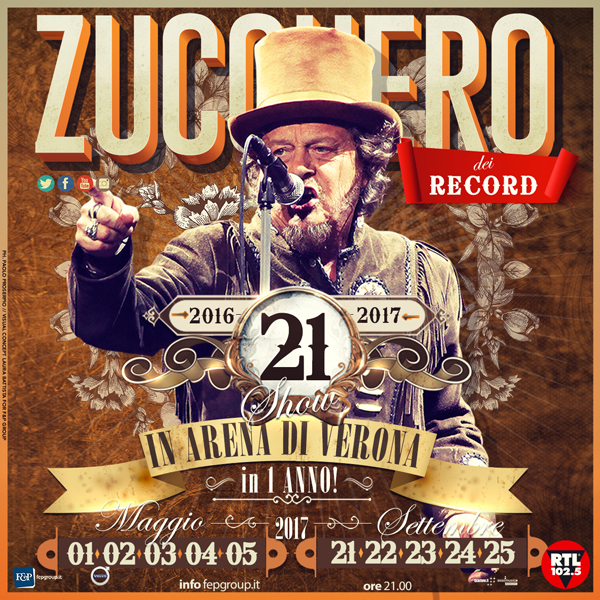 TOMORROW FOR THE FIRST TIME, SPECIAL GUEST AT THE FESTIVAL OF SANREMO

21 DATES AT THE VERONA ARENA FOR THE “BLACK CAT WORLD TOUR”: A RECORD!

Zucchero’s “Black Cat World Tour 2017” has seen the addition of five new Italian dates: September 21st, 22nd, 23rd, 24th and 25th at the Verona Arena!
These concerts will accompany his live shows on May 1st, 2nd, 3rd, 4th and 5th, in which the artist will sing his most popular hits against the splendid backdrop of the Veronese amphitheatre! These ten dates in May and December will bring Zucchero’s total number of shows in the VERONA ARENA to twenty-one in just twelve ,months, a RECORD!

Meanwhile, tomorrow, Saturday February 11th, on the final evening of the 67th Edition of the Festival of Sanremo, Zucchero will perform on the Ariston Theatre stage as a special guest for the first time ever. Moreover, after a stringing together whole series of sold out shows throughout Europe in 2016 in front of over 250,000 people, from March he will take the songs from “Black Cat”, as well as many of his other hits, to North America, South America, Australia, New Zealand, Japan and North Africa before returning to Europe for the major summer festivals!